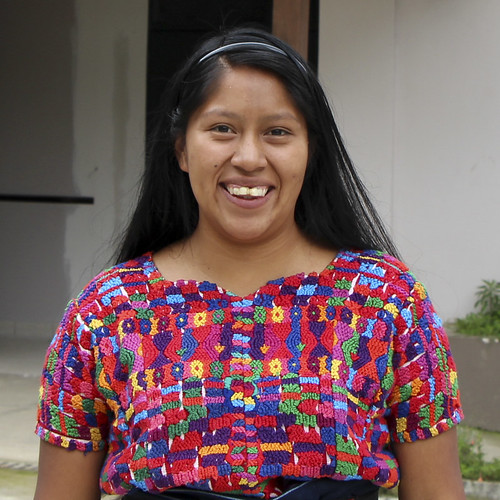 How many girls play teacher when they are little? Assigning homework to stuffed animals and diligently grading fake exams, happily dreaming about a future when it all becomes reality. Heydi Chancho Sirin was no different. “I used to set sticks and sheets of paper in front of trees as if they were pencils and notebooks. The trees were my students,” she says, laughing. “I wanted to be a teacher for as long as I can remember.”

Without Cooperative for Education’s (CoEd’s) Rise Youth Development Program, Heydi, like so many children in Guatemala, would have been stuck playing pretend forever. Her father died when she was 10, leaving their family with a deep emotional and financial void. “My mom said that I could only study until sixth grade, and then I had to start helping her sell vegetables at the market,” Heydi remembers. “I was devastated.”

When Heydi was in sixth grade, her teacher introduced CoEd’s Rise program to the class. Heydi thought that this could finally be her chance to stay in school. She didn’t get chosen for the program in the first round of student selections. Years later, Heydi is clearly still emotional about this disappointment, crying as she says, “I prayed to God, saying, ‘How can it be that I won’t be able to achieve this dream that I’ve had for so long?’”

Just before the school year began, Heydi received a second chance when she was called upon to substitute for another student who didn’t show up for program orientation. The rest is history—Heydi excelled in school and now works for the very organization that restored her dreams when she thought all was lost.

This tiny 7th grader has made her dreams into a reality thanks to CoEd’s Rise Youth Development program.

Heydi, now 19, is one of the newest members of CoEd’s Rise Program team. As a local facilitator, she leads program activities in Santiago Sacatepéquez—organizing workshops, delivering supplies, and coordinating with the schools. This role enables her to ensure that all Rise scholars reach their full potential. “My experience working for CoEd has been beautiful. Many of the Rise students have problems at home, financial troubles, a lack of confidence, etc., but they learn how to cope with these issues thanks to the youth development program.”

Heydi continues, “The mentoring, counseling, and leadership building components of the program are very important for us young people because these themes help us believe in the potential that we have to achieve our goals. CoEd taught me that when you put your dreams and goals first, you can achieve them.”

Heydi has a special message for all Rise sponsors: “Thank you for the support you have given us. You have helped so many young people achieve their dreams. Not just anyone would do what you do, and you are teaching us all something very important—solidarity. I encourage you to keep giving because YOU are the reason so many students have become graduates.”

Armed with the confidence and determination she gained as a Rise scholar, Heydi has started a new project: learning English. She repeats a mantra she learned when she was in the program: “Everything is hard at the beginning, but when you have the motivation to achieve it, it is always possible.” She smiles and says, “Look at me—I’m finally teaching real people instead of trees.”

You can help girls just like Heydi reach their dreams too!